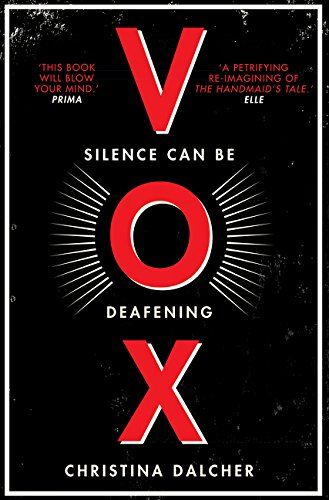 Jean McClellan spends her time in almost complete silence, limited to just one hundred words a day. Any more, and a thousand volts of electricity will course through her veins. Now the new government is in power, everything has changed. But only if you’re a woman. Almost overnight, bank accounts are frozen, passports are taken away and seventy million women lose their jobs. Even more terrifyingly, young girls are no longer taught to read or write. For herself, her daughter, and for every woman silenced, Jean will reclaim her voice. This is only the beginning…

Vox has been all over the book community recently and I was really excited to have the opportunity to be one of the lucky people to be able to review this book early. I don’t like it when books get hyped because it give the book a lot to live up too but for me this book did live up to the hype and even though I did find some parts a little hard to read I did enjoy reading Vox.

In essence Vox is about a a near future America where woman are now treated as second class citizens and are limited to only speak 100 words a day. If a woman speaks over a 100 words in one day then be subjected to electric shocks from a bracelet that they are forced to wear. We are introduced to Jean who is a scientist and has been limited to 100 words a day for a while and is starting to see the effects its having on her daughter. The State then want Jean’s help, but she finds that things could be about to get a how lot worse.

I really connected with Jean as a main character. I felt her anger, frustration and sometimes loneliness throughout the story. I myself got frustrated with her quite a few times with the way she and other women were being treated, it was hard to read without wanting rip out pages in anger. I won’t name the other characters that annoyed me because I think it would be best going into this book without spoilers, but one character in particular annoyed me so much that every time they appeared or were mentioned my blood would boil.

Vox has been described as the new The Handmaid’s Tale, and even though I have never read The Handmaid’s Tale I know that’s a lot to live up to. I went into this book knowing the basic premise of the story, but for me I found the story to have many different aspects and it felt so raw, and so emotional that it was difficult to not get caught up in the story and become attached to the characters. I did find it very difficult to read some parts of the book because they were so hard hitting, and even though its a work of fiction it was still hard to read because some of it is happening in society today.

This is the authors debut and I have to say that if this is her first book then I cannot wait to see what we get in the future because if its anything like this then we are all in for some really intriguing and well written books. Vox isn’t a huge book and speed wise I found it easy to read because I read the entire book in just one sitting. Yes I had to put the book down a couple of times for a few minutes because I was getting annoyed with certain characters and I thought that I would have to put the book down before I start ripping pages out. But I really did like the writing, it very engaging and descriptive and it definitely bought this horrid world to life. I thought the last few chapters went a little quick and tied everything up a little too quickly but other than that I thought the pacing, the plot and the writing was spot on and I sailed through the book.

Vox is the sort of book that will stick with you for a while. Even now I have read other books since Vox, but still the story is in the back of my mind. I think that everyone needs to read this book because its thought provoking, well written and somewhat scary. Everyone has been describing this as the new The Handmaid’s Tale, but for me I want it to stand out on its own merits because it really is a great book. So if you have read this book then don’t be silent, shout about this book and let everyone know about Vox.

1 thought on “Vox by Christina Dalcher”