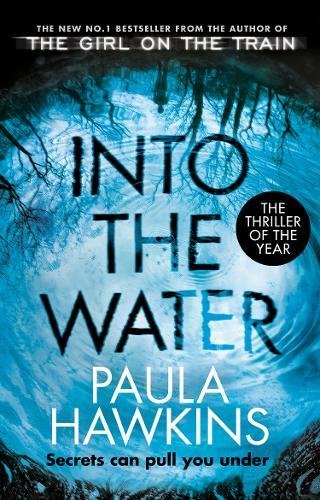 Just days before her sister plunged to her death, Jules ignored her call.

Now Nel is dead. They say she jumped. And Jules must return to her sister’s house to care for her daughter, and to face the mystery of Nel’s death.

But Jules is afraid. Of her long-buried memories, of the old Mill House, of this small town that is drowning in secrecy . . .

And of knowing that Nel would never have jumped.

After hearing so much praise for The Girl on the Train I had very high hopes for Into the Water, but I was a little let down. I found this book to be a little disjointed, confusing and not very interesting. At one point I did consider putting this book down and leaving it unfinished. I am glad that I did read to the end because it really bugs me when I leave a book half finished, and I think it did redeem its self towards the end a little as well, but not enough to totally win me over.

This is the first book I’ve read from Paula Hawkins and I had some very high hopes even before starting this because of all the rave reviews The Girl on the Train got when it was released a couple of years ago. I didn’t not like the writing in Into the Water, but it didn’t grab me as much as I hoped it would. I was expecting to be hooked from the very beginning, but I felt the writing was a bit of a let down.

I have to say that I thought the parts of the plot did grab my attention and I did find parts interesting, but my interest didn’t hold for the entire book. The beginning was a bit of an effort to work through, at one point I did consider not finishing the book at all. I think this would of been perfect as a short story, with all the filler parts of the plot taken out. I found the plot to be over complicated and over thought out. If it was a little more simpler, then I might of enjoyed reading it a bit more than I actually did.