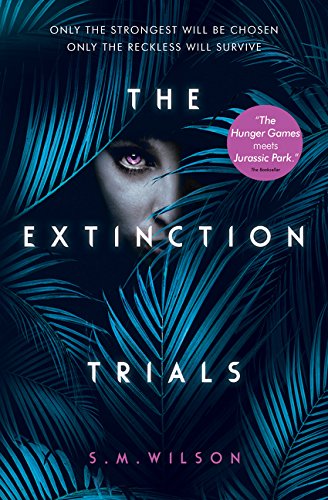 Before starting this book, I did have some very high expectations. The reviews I have read for this book have been mostly positive, and because its has dinosaurs. This must be the first book I have read that features dinosaurs, and after reading this, it won’t be my last. The Extinction Trials totally smashed my expectations and is one of my favourite reads of this year.

The Extinctions Trials is being sold as ‘The Hunger Games meets Jurassic Park’, and I have to say that I think thats a brilliant way to describe the book. As soon as I started reading I definitely felt The Hunger Games theme, the way the dystopian setting is described it does share some similarities with The Hunger Games world. But for me after a while I forgot about it being like The Hunger Games, and noticed its own merits.

I found the plot to be both original and exciting. As I’ve said I’ve never read a book about dinosaurs before so I didn’t know whether I would love reading about dinosaurs, or whether they should be just something you watch in films. But I thoroughly enjoyed reading about them, and I cannot wait for the sequel. Its not just the dinosaurs that won me over, the plot is very intriguing and very addictive. I found it very hard to put the book down, and I managed to read the entire book in just a couple of sittings. The Extinction Trials is full of action, excitement, politics and twists, its hard not to fall in love with this book.

Only after reading The Extinction Trials did I find out that this is the authors debut novel because for me this read like the author has written tonnes of books. I found the writing to be both engaging and descriptive. I could visualise the dull dystopian world at the beginning of the book, and then the deadly, colourful world of Piloria. I found the story kept its tension and flowed really well, at no point in the book did I feel the story was becoming dull or stale. If anything I had to give myself a couple of minutes to recover from the non stop action and catch my breath.

Yes I would definitely recommend this book to fans of The Hunger Games series, and Jurassic park lovers, but I would also recommend The Extinction Trials to people who want and exciting, original and well written adventure story. I am so glad I have not got long to wait for the next book to be released because I need to jump back into this world again. I urge you all to go out and buy this book because you will not be disappointed.

2 thoughts on “The Extinction Trials by S.M. Wilson”