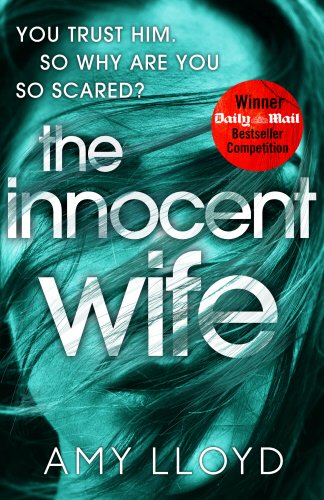 Twenty years ago, a young girl was brutally murdered in Florida. Dennis Danson was arrested, convicted, and imprisoned.
He swore he was innocent.
Now he’s the subject of a true-crime documentary that’s whipping up an online frenzy to uncover the truth and free a man who has been wrongly convicted.
A thousand miles away in England, Samantha is obsessed with Dennis’s case. She exchanges letters with him, and is quickly won over by his apparent charm and kindness to her. Soon she has left her old life behind to marry him and campaign for his release.
But when the campaign is successful and Dennis is freed, Sam begins to discover new details that suggest he may not be quite so innocent after all.
But how do you confront your husband when you don’t want to know the truth?

The Innocent Wife is one of them books that grabs your attention immediately and then doesn’t let you go until you have read the very last page. I struggled to put the book down, and when I did manage to close the book, the story and the characters were always in the back of my mind. I found it very hard to switch off from the book because I became so addicted to the story. I can see now why this book has won awards and has got some very positive reviews.

One reason why I wasn’t totally blown away by this book is that sometimes I couldn’t connect with the main character. I am not saying that the characterisation is poor, I just couldn’t gel with Samantha. I can’t even pinpoint the reason why I didn’t like her, and I am in the minority because I have seen other reviewers really love the character, but for me I just couldn’t get on with her. It didn’t make me dislike the book, I still enjoyed it. I just think that I would of enjoyed the book even more if I liked the main character.

I found the story to be very original, and not something that I have read about before. I don’t read a lot of psychological thrillers but for me this was very different from what I have read in the past. In the beginning I liked the way the chapters alternated with Samantha’s story, and the newspaper stories. I found this to be a really interesting concept and it definitely grabbed my attention.  I also liked that the book featured Death Row, and how the inmates live and communicate with the world outside. I have seen TV shows where people have sent letters to inmates at Death Row, but this is the first book I’ve read about that subject, and I found it very fascinating.

Another reason why I really liked The Innocent Wife is because of the way it is written. I found the writing to be very engaging and informative. Also the way the tension built up throughout the story, had me on the edge of my seat at times. With every twist and turn of the plot I felt myself holding my breath, more and more. It felt like I was reading a script for a gritty TV thriller or a hard hitting film. I could easily see this being made into a TV series or a film, I think many people would enjoy it.

I would recommend The Innocent Wife to all readers who love a gripping thriller read. This book is intense, full of twists, and really well written. I know there are hundreds of different thriller books available to read at the minute, but if you are looking for one that will hook you from the very first page, then pick up The Innocent Wife.