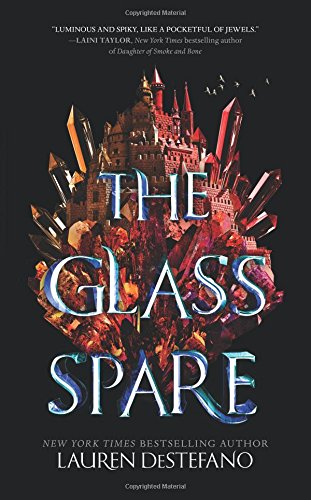 Wilhelmina Heidle, the fourth child and only daughter of the king of the world’s wealthiest nation, has grown up in the shadows. Kept hidden from the world in order to serve as a spy for her father—whose obsession with building his empire is causing a war—Wil wants nothing more than to explore the world beyond her kingdom, if only her father would give her the chance. Until one night Wil is attacked, and she discovers a dangerous secret. Her touch turns people into gemstone. At first Wil is horrified—but as she tests its limits, she’s drawn more and more to the strange and volatile ability. When it leads to tragedy, though, Wil is forced to face the destructive power within her and finally leave her home to seek the truth and a cure. But finding the key to her redemption puts her in the path of a cursed prince who has his own ideas for what to do with Wil’s power. With a world on the brink of war and a power of ultimate destruction, can Wil find a way to help the kingdom that’s turned its back on her, or will she betray her past and her family forever?

I found Wil to be a great main character, she is caring, strong and very resourceful. She is able to look after herself and she knows what she wants. Wil’s two brothers, Gerdie and Owen, are two great characters as well. When Wil is with her brother you can see how close they are and how they look after one another. The relationship between the siblings was something I would have loved to read more about because it was really enjoyable to read.

One problem I had with The Glass Spare was that the world building wasn’t as developed as I had hoped. I found it very hard to get lost in the world and visualise it all in my head while reading. With a book like The Glass Spare you want to be transported to a new world and want to se and feel the world, but for me I couldn’t and it made me feel a little bit disconnected from the book. One thing I did like about the world though was that it was a fantasy world with technology. I have never read a fantasy book that featured any sort of technology, so I thought this was a refreshing take on the genre.

I thought the story was original and definitely different to other books. It did take me a while to get into the book but reading about Wil and her brothers relationship helped me along and after a few chapters I was hooked. I thought that Wil’s power was something new and exciting, I’ve never read a book about someone who can turn people to gems. But I found it really interesting and when she went off in search for a cure I couldn’t put the book down. That part of the story had be gripped to every page I didn’t want to leave the book unfinished. There is a love interest in the book, but what I liked about this was that the love story didn’t take over the main story and instead it built up around the main story slowly, which made it more believable.

I found the book to be very well written apart from my issues with the world building. The characters were well developed and came across as genuine. Also the story was didn’t lull or become boring. Yes it did take a few chapters for me to get into the book, but once you pass that mark I am sure you will be as invested in the story as I was. The story isn’t fast pacing, but because its so interesting and different, I wasn’t bored while reading it.

I would recommend reading The Glass Spare because it is such a great read. For me there was a problem with the world building, but that didn’t mean that the characters weren’t well developed or the story fell flat, because they didn’t. I will still carry on with this series because I want to see where the story will go, because there are so many different possibilities, I am exciting to see where the author takes it enact. I just hope that the world building issue is sorted in book two, The Cursed Sea.

1 thought on “The Glass Spare by Lauren DeStefano”