The theme for July’s Fairyloot was Tricksters, and I was very excited to see what sort of items they would include in the box. I had really high hopes for this box, because I love the Tricksters theme. After seeing the items featured in this box I have to say that this box features the widest range of items we have ever had in a Fairyloot box. I hope that this will be a new age in the Fairyloot boxes. 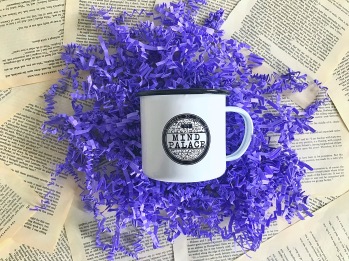 The first item was this Sherlock Enamel Tin Mug that was exclusively designed by Fictiontea Designs. I have so many bookish mugs now, but the one thing I like about this mug is that its different from what you normally get because its made of enamel. I also love the design for this, its simple but eye catching. And whats not to like about a Sherlock mug!

The second item was this Exclusive Loki Lotion made by Geeky Clean. This is the first time I have unboxed a lotion in a bookish box, and I hope there will be more in the future. I have nearly used the lotion already, it smells wonderful, and I will be definitely buying more from Geeky Clean.

Also featured in this box were these Hogwarts Playing Cards. I think these cards are my favourite item from this months box. The cards are stunning to look at, and I like how the cards are the four Hogwarts houses instead of the normal card suites. Also the tin the cards came in is really neat. I am a little scared to use them just incase I bend or rip them. 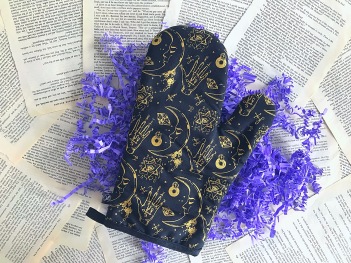 Another new item featured in the box was this Fortune Telling Kitchen Glove, made exclusively by Fairyloot. I was a little surprised when I unboxed this because its not something you would expect to find in a bookish box, but I really do like the design for this. I don’t think I would actually use it, but I like that it’s something different.

Also included in this box was this Exclusive Harley Quinn Print made by Miss Phi. First off I have to say I love the colours and the design in this print, its gorgeous. The colours are very Harley Quinn and I really like the quote featured in the print as well. This has to be one the most stunning prints Fairyloot has ever featured. 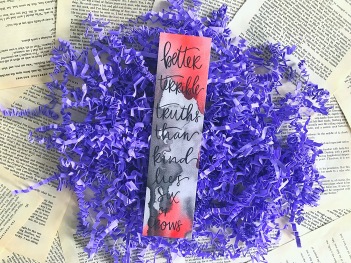 The last bookish item featured in this box is this Terrible Truths Watercolour Bookmark, made by Lexy Olivia. Again I really like the quote featured on this bookmark, its fits in with the theme really well. I do like watercolour bookmarks because they do stand out and look so pretty when being used in books. 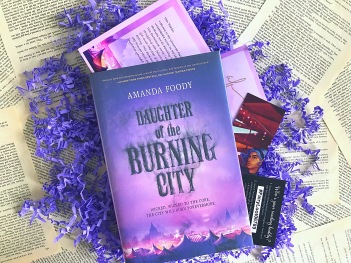 Finally the book featured this month is Daughter of the Burning City by Amanda Foody. I don’t know that much about this book, but I have seen this book all over the book community recently, so I can’t wait to start reading this. Also included with the book was a signed bookplate and a letter from the author.

I really did like the wide variety of items included in this months box, they were all so random, but all fitted in well with the Trickster theme. One thing I did miss unboxing was a bookish candle. I am so used to smelly new a different candles everytime I unboxing a bookish subscription box, that I did miss it this time. I know in the next box there will be a candle featured, so I am not to angry about missing one this time round. I really do hope that Fairyloot do continue to feature different items in their boxes because I can definitely see the box appealing to more and more people because it will stand out from the rest.

If you are thinking to subscribing to FairyLoot then I would suggest signing up to their Newsletter and they will get in contact with you with new themes and the date for when the boxes become available to order.

I have already subscribed to the next box, which has the theme of Otherworlds. I am excited to see what items they have planned to featured in the box because I love the theme title and the suppliers that have been revealed looks like its going to be a great box.