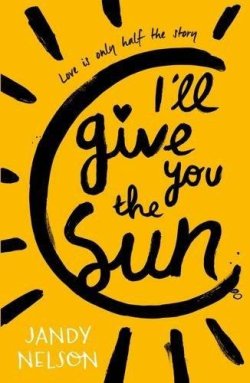 Jude and her brother, Noah, are incredibly close twins. At thirteen, isolated Noah draws constantly and is falling in love with the charismatic boy next door, while daredevil Jude surfs and cliff-dives and wears red-red lipstick and does the talking for both of them. But three years later, Jude and Noah are barely speaking. Something has happened to wreck the twins in different and divisive ways…until Jude meets a cocky, broken, beautiful boy, as well as an unpredictable new mentor.

This book has been sitting on my shelf for a couple of years now, I bought it after hearing so many amazing reviews about it. But for some reason I never fancied picking it up and give it a read, until now. Now that I have actually finished it, I have to say that the hype surrounding the book definitely built up my expectations too much. Im not saying its a bad book, because it isn’t, but I feel its not worth all the hype it has gotten in the past.

I’ll Give You The Sun is about Jude and her twin brother Noah, who are inseparable. Noah loves to draw all the time, and it also developing strong feelings for the boy next door. Jude is the more outgoing and reckless twin, she likes cliff diving and does the talking for both her and Noah. However years later the twins barely speak to each other, and something devastating has happened to them both.

One thing I didn’t expect to find when reading this book was that the two POVs were told from different years. Noah’s POV is told from the early years and when the twins were talking and always together. Whereas Jude’s POV is told from the later years after something dreadful has happened to them both. I think if I knew this from the start I might have liked this book a little more, but instead I found it to be a little confusing and it did take me time to get my head round the story.

As always when there is more than one characters POV told in the book there is a character you always connect with more than the others. With this book I connected more with Jude than I did with Noah. I would rather of had the entire book told from Jude’s POV than Noah’s, I think her story was a little more engaging and definitely kept me reading to the end. But thats just my opinion, now having finished the book I have been reading some spoiler reviews and I have seen some people like Noah’s POV more and wished that the whole book was told from his point of view.

As I said Jude’s story arc made me want to finish the book, otherwise I think I would of DNF this book. I got just over half way and I was really considering putting the book down and starting another one instead. However Jude’s story kept me engaged a bit longer and I managed to finish it. I think because I didn’t like Noah’s chapters that much it was a struggle to read them to get to Jude’s chapters. The middle of the book for me did drag a little and I found myself putting the book down more than normal. Even though I did find it a struggle I am glad I carried on and finished the book.

This is my first Jandy Nelson book and quite a lot of the reviews were going on about how beautifully written this book was. Now having read the book I can agree that the writing is beautiful and has some very meaningful. There are some very hard issues and topics covered in this book and I think the author has managed to address them respectfully. I just think the main problem for me is the pacing and the way the story is told.

If like me you have read some amazing reviews about this book and plan on reading it soon, then all I can say is that don’t expect too much from this book. If you go into this book with no expectations then you might it enjoy it more than you would if you think this book is going to be groundbreaking. Don’t get me wrong this is still an important book, and I did enjoy the majority of it, just don’t believe in the hype.