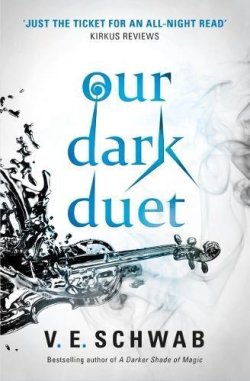 Our Dark Duet has been one of my most anticipated reads of this year, and I can officially say that it didn’t let me down. I enjoyed the first book in this duology, This Savage Song, but I have to say that I absolutely loved this one. I found the plot and the characters a little more developed.

Obviously with this being the second book in the duology I can’t really say too much without giving away the story of This Savage Song. But the story picks up six months after the ending of This Savage Song. Kate is now living under a new identity in a new city, and August is trying to adjust to the changes that have happened to Verity. I know the plot sounds very vague, but its really not, so much happens in this book and so much development that I don’t want to spoil any of it.

I found that Kate’s character in particular was developed and expanded a little more than it was in the first book. I remember that I wasn’t too keen on her character until over half way through This Savage Song. But I enjoyed her story and how she progressed in both the books. Again August was a brilliant character to read about, its hard to not fall in love with him as soon as you read about him. I liked how that both characters had a story to tell and that both were equally interesting and exciting to read about.

One of the main reasons why I enjoyed Our Dark Duet was because the story to me is very original and left me on the edge of my seat at times. I liked how the story didn’t end lightly and instead ended up being quite shocking. After reading the last book in the Darker Shade of Magic series, I expected kind of a happy ending, where the good people won and the bad people died. However the ending did shock me a little and was not what I was expecting. Again this book was full of brutal fights and many monsters, so it kept me entertained up until the very end.

As with all the other books written by V. E. Schwab, I adore the writing and the way it manages to suck you in and leaves you wishing that it would never end. V. E. Schwab is a magician when it comes to writing because she manages to paint such a vivid image in your mind, while reading, that its hard not to fall in love with the story and the characters. I also like the way she manages to think and create such amazing plots and characters, that when you have finished reading they stay with you for a long time after.

If you want to read something different and something that will keep you glued to every page, then you should definitely check out This Savage Song and Our Dark Duet. It has everything you need for a perfect monster read. If you loved the Darker Shade of Magic series, then you would definitely love this duology.

***I was sent a copy of this book to review. Everything in this review is my own honest opinions.***

Book One- This Savage Song Review