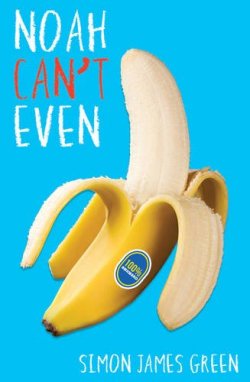 Poor Noah Grimes! His father disappeared years ago, his mother’s Beyonce tribute act is an unacceptable embarrassment, and his beloved gran is no longer herself. He only has one friend, Harry, and school is…Well, it’s pure HELL. Why can’t Noah be normal, like everyone else at school? Maybe if he struck up a romantic relationship with someone – maybe Sophie, who is perfect and lovely – he’d be seen in a different light? But Noah’s plans are derailed when Harry kisses him at a party. That’s when things go from bad to utter chaos.

I absolutely adored reading Noah Can’t Even, it had me laughing out loud and made me smile for the entire book. After reading just the first couple of pages I was already crying with laughter, its hard to think back to when a book actually made me laugh with tears rolling down my face. But this book is not just full of humour, it also has some touching and quite relatable moments as well.

Noah Can’t Even is about Noah Grimes, who wants to be a normal student, with friends, a social life, and a girlfriend. Noah has done everything to try and fit in with his fellow students, but most of the times he fails and is then mocked by his classmates. However when Sophie, a girl he has always liked, invites him to a party, he sees this as his opportunity to finally be the normal student. But when he is at the party instead of getting kissed by Sophie, Noah instead is kissed by his best friend Harry. With this kiss his life is then thrown upside down and he has no idea what to think or do.

As I have already said this book made me laugh and smile throughout, and the main reason for this is because of Noah, he is so awkward and weird that is hard not to laugh. Noah is the sort of character that you wished existed in the real world because with someone like Noah in your life, it would never be boring. Everything he thinks and does always ends up being hilarious and I think Noah has to be one my favourite characters I have read about this year.

I managed to read this book in just a couple of sittings. I found the plot to be really funny and very light hearted, but as the story continued I felt the plot did become more serious. That’s not to say it wasn’t as funny towards the end, because it was. I just felt that towards the end of the book the comedic parts of the plot was a little lighter than the beginning. I wasn’t bored while reading this, sometimes with contemporary books the middle part of the story drags and is a little dull, but that’s not the case for Noah Can’t Even. I could not guess where the plot was going or how it would end. Every time I thought something was going to happen, something else entirely would happen. It does keep you interested and on your toes while reading.

One of the main reasons I love this book is because of Simon James Green’s writing. It is so engaging, hilarious, heart warming and very British, I loved every minute reading it. I liked how the book is a coming of age story, with the LGBTQ theme, and it being set in England. I have not read a LGBTQ book set in Britain before, and I feel enjoyed reading this, and I cant wait to read more in this series.

I would highly recommend Noah Can’t Even to everyone who wants to read a genuinely hilarious coming of age story. This book will make you cry with laughter and warm your heart.

1 thought on “Noah Can’t Even By Simon James Green”