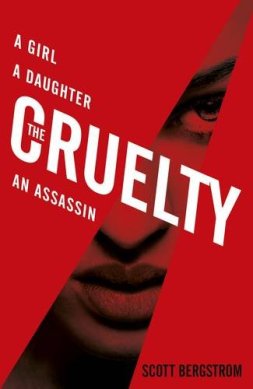 When Gwendolyn Bloom realizes that her father has been kidnapped, she has to take matters into her own hands. She traces him from New York City across the dark underbelly of Europe, taking on a new identity to survive in a world of brutal criminal masterminds. As she slowly leaves behind her schoolgirl self, she realizes that she must learn the terrifying truth about herself. To overcome the cruelty she encounters, she must also embrace it.

The Cruelty blew me away from the very beginning. The story was exciting and action packed, the characters both interesting and likeable, the writing superb and gripping. Everything you need for a great thriller book is all here in The Cruelty.

In a nutshell the story is about a 17 year old school girl called Gwendolyn Bloom. When she finds out that her father, a government worker, has been kidnapped, she stops at nothing to find where her father is. In searching for her father she visits many different cities including, Prague, Paris and Berlin.

First off I just want to say that I absolutely love the name Gwendolyn, and love it even more that its our main characters name. I like that the name is different but very memorable, just like this book. Gwendolyn is the perfect character for this story because he an independent, outgoing, decisive, determined and very intelligent, which is everything you need to be an assassin. I’m not going to lie when I first read that she was 17 years old I did have my reservations about how much would a 17 year old actually be able to do in a situation like this. But I have to say that my reservations were completely forgotten once I started to know more about Gwendolyn because she is very mature for her age and actually thinks like an adult rather than a young adult. This made the plot a lot more believable then I thought it would of been.

The plot for The Cruelty was absolutely amazing, it read like an action packed thriller film. Also with the many different locations in this book you can easily visualise this book being turned into a film very easily. The main strength of the plot for me is Gwendolyn. With this being a thriller/spy/espionage book it would be easy to assume that the main character would be a male. However with the main character in this being female, it makes this book both original and exciting. I have never read a spy book before where a women is the main character and I found it to be a really refreshing read. Having Gwendolyn as the character you don’t just have another copy of James Bond or Jason Bourne, this instead is something new and bold.

Scott Bergstrom’s writing is stunning, exciting and gripping. With a thriller novel you need to keep the pace or the story can sometime fall flat, but the author does not have this problem. The pace throughout the book is always well kept and leaves you on the edge of your seat quite a few times. This is Scott Bergstrom’s debut novel but you will be hard pressed to tell this. Everything in this book feels like the author has been writing for years and knows what they are doing. Both the plot and the characters are well researched and developed, which helps visualising the story even easier when reading.

If you are looking for a thriller/spy book that has something original and refreshing, but still has the action packed edge of your seat adventure, then The Cruelty is a must read for you.

***I was sent a copy of this book by the Publisher to review. Everything in this review is my own honest opinions.***

1 thought on “The Cruelty by Scott Bergstrom”