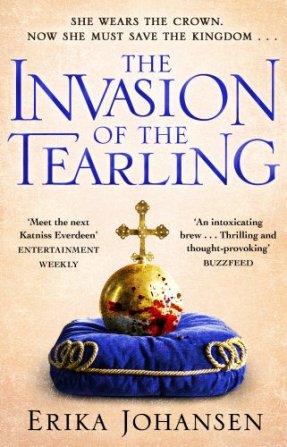 With each passing day, Kelsea Glynn is growing into her new responsibilities as Queen of the Tearling. By stopping the shipments of slaves to the neighbouring kingdom of Mortmesne, she crossed the Red Queen, a brutal ruler whose power derives from dark magic, who is sending her fearsome army into the Tearling to take what is hers. And nothing can stop the invasion.
But as the Mort army draws ever closer, Kelsea develops a mysterious connection to a time before the Crossing, and she finds herself relying on a strange and possibly dangerous ally: a woman named Lily, fighting for her life in a world where being female can feel like a crime. The fate of the Tearling – and that of Kelsea’s own soul – may rest with Lily and her story, but Kelsea may not have enough time to find out.

After really enjoying The Queen of the Tearling I was a little worried that the sequel would not live up to the hype, but after reading this I needn’t of worried because The Invasion of the Tearling is as exciting and enjoyable as the first book.

There will be a couple of minor spoilers in this review, if you have not read the book and don’t want to be spoilt then please don’t read any further.

The Invasion of the Tearling is a great second book because it answers some questions that were left unanswered in the first book, and it also leaves you asking new questions in preparation for the third book. Both the world and the characters have been expanded and you learn more about Kelsea, Mace and the Red Queen. By the end of the book you feel as if you know the Tearling world and its characters.

With Kelsea now a bit more settled in her role as Queen you are able to see the troubles and decisions she has to make in ruling her kingdom, and the way Erika Johansen writes it feels as if them troubles and decisions are your own. You feel as your part of the story and that the characters are all very real. I liked that Kelsea was trying to please most people and to make the kingdom fair for everyone. I found this book to be a bit more heavy on the political side of ruling a kingdom, and I really enjoyed reading about it. By reading the book you are able to work out that Kelsea hasn’t and wont get it right every time and its okay to fail and make mistakes.

I loved the addition of Lily in this book. Even if it took me completely by surprise because one minute I was reading about the Tearling to then be transported back to before the Crossing. I really enjoyed learning about what the world was like before the Crossing, and in a way it was a bit scary because it felt like it could actually happen now in real life. I did find some the situations involving Lily a little hard to read because of the distressing circumstances, but by the end of the book I was cheering her on all the way and I just wanted her to be happy.

Again Erika Johansen’s writing is superb. After finishing the first page you are dragged back into the Tearling world, like you had never left. Erika Johansen has a way of recapping the plot from the previous book without dumping loads of information all at once. She writes subtle reminders, and as you read the book you start to remember things, and I really like the way its done. The writing again is both engaging and exciting, I know a couple of times I was on the edge of my seat reading, which for me is a sign that the writing it brilliant.

I would recommend this book and this series to anyone who wants a well thought out historical fiction/fantasy/dystopian novel. If you like your books to have detailed and amazing characters, set in a well thought out world, with an exciting and interesting story, then the Tearling series is for you.

Here is my review for the first book in the series, The Queen of the Tearling.

2 thoughts on “The Invasion of the Tearling by Erika Johansen”