I want to try and read the following five books before the end of the year. I know I have two months left and its only five books, but I have had most of these books for at least a few months now and I still haven’t read them even though I am dying to start them. I thought that if I made a post about them then perhaps it would kick me into shape and actually get me to start reading them.

The Crown’s Game by Evelyn Skye

Vika Andreyeva can summon the snow and turn ash into gold. Nikolai Karimov can see through walls and conjure bridges out of thin air. They are enchanters—the only two in Russia—and with the Ottoman Empire and the Kazakhs threatening, the tsar needs a powerful enchanter by his side. And so he initiates the Crown’s Game, an ancient duel of magical skill—the greatest test an enchanter will ever know.  The victor becomes the Imperial Enchanter and the tsar’s most respected adviser. The defeated is sentenced to death.  As long-buried secrets emerge, threatening the future of the empire, it becomes dangerously clear . . . the Crown’s Game is not one to lose.

After hearing so many great things about The Crown’s Game I decided to buy myself a copy. This ticks every box I have to be a brilliant read, it has magic, duels, deaths and secrets, what’s not to like about this book? I just hope that I get round to reading it soon.

ome to Caraval, where nothing is quite what it seems. Scarlett has never left the tiny isle of Trisda, pining from afar for the wonder of Caraval, a once-a-year week-long performance where the audience participates in the show. Caraval is Magic. Mystery. Adventure. And for Scarlett and her beloved sister Tella it represents freedom and an escape from their ruthless, abusive father. When the sisters’ long-awaited invitations to Caraval finally arrive, it seems their dreams have come true. But no sooner have they arrived than Tella vanishes, kidnapped by the show’s mastermind organiser, Legend. Scarlett has been told that everything that happens during Caraval is only an elaborate performance. But nonetheless she quickly becomes enmeshed in a dangerous game of love, magic and heartbreak. And real or not, she must find Tella before the game is over, and her sister disappears forever.

I fell in love with the covers of the proof editions a few months back and I desperately wanted to read it. I got my copy after winning a giveaway someone was hosting and for some reason I have just left it looking pretty on my shelf rather than reading it. Everyone has been saying how amazing this book is and I’m feeling a little left out now and I really want to read it before the year is out.

The Storm Sister by Lucinda Riley

Ally D’Aplièse is about to compete in one o 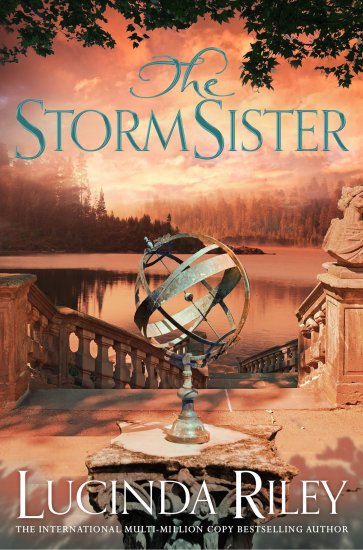 f the world’s most perilous yacht races, when she hears the news of her adoptive father’s sudden, mysterious death. Rushing back to meet her five sisters at their family home, she discovers that her father – an elusive billionaire affectionately known to his daughters as Pa Salt – has left each of them a tantalising clue to their true heritage. Ally has also recently embarked on a deeply passionate love affair that will change her destiny forever. But with her life now turned upside down, Ally decides to leave the open seas and follow the trail that her father left her, which leads her to the icy beauty of Norway. There, Ally begins to discover her roots – and how her story is inextricably bound to that of a young unknown singer, Anna Landvik, who lived there over a hundred years before, and sang in the first performance of Grieg’s iconic music set to Ibsen’s play ‘Peer Gynt’. As Ally learns more about Anna, she also begins to question who her father, Pa Salt, really was. And why is the seventh sister missing?

I read The Seven Sisters, which is the first book in this series, at the beginning of the year and I enjoyed it so much. I had never heard of this series of the author before and I only bought the first book because the cover was stunning, but after flying through the entire book in a few days, I was hooked and I bought The Storm Sister as soon as I finished. I planned on reading this one straight after but I found out that the third book wasn’t going to be released until March 2017 so I held off a bit from reading this one. But now I think its the right time to read this in preparation for the third books release. I love the story and the writing in the first book, so I’m sure this book will be just as good.

One book. Two readers. A world of mystery, menace and desire. A young woman picks up a book left behind by a stranger. Inside it are his margin notes, which reveal a reader entranced by the story and by its mysterious author. She responds with notes of her own, leaving the book for the stranger, and so begins an unlikely conversation that plunges them both into the unknown.

THE BOOK: Ship of

Theseus, the final novel by a prolific but enigmatic writer named V. M. Straka, in which a man with no past is shanghaied onto a strange ship with a monstrous crew and launched on a disorienting and perilous journey.

THE WRITER: Straka, the incendiary and secretive subject of one of the world’s greatest mysteries, a revolutionary about whom the world knows nothing apart from the words he wrote and the rumours that swirl around him.

THE READERS: Jennifer and Eric, a college senior and a disgraced grad student, both facing crucial decisions about who they are, who they might become, and how much they’re willing to trust another person with their passions, hurts and fears.

I picked up this book after it showed up on my Recommended reads list and once I read the description I immediately bought myself a copy. I think this will be like nothing I’ve read before with all the different items and materials scattered through the book. As well as reading annotated notes and reading the actual text, this sounds like its going to be an awesome read. Even if it will take some time to completely read it all, I am excited to start.

Victor and Eli started out as college roommate

s brilliant, arrogant, lonely boys who recognized the same ambition in each other. A shared interest in adrenaline, near-death experiences, and seemingly supernatural events reveals an intriguing possibility: that under the right conditions, someone could develop extraordinary abilities. But when their thesis moves from the academic to the experimental, things go horribly wrong. Ten years later, Victor breaks out of prison, determined to catch up to his old friend (now foe), aided by a young girl with a stunning ability. Meanwhile, Eli is on a mission to eradicate every other super-powered person that he can find aside from his sidekick, an enigmatic woman with an unbreakable will. Armed with terrible power on both sides, driven by the memory of betrayal and loss, the arch-nemeses have set a course for revenge but who will be left alive at the end?

I have read the first two books of the Darker Shade of Magic series and This Savage Song, all by V E Schwab, and I absolutely loved them all. I got this in the summer and I said to myself I would have it read in a couple of weeks, but its still waiting to be picked up. The description for the book sounds amazing and I love reading V E Schwab’s writing, so I’m determined to start and finish this book before 2017.

What are books do you want to have read before the end of the year?