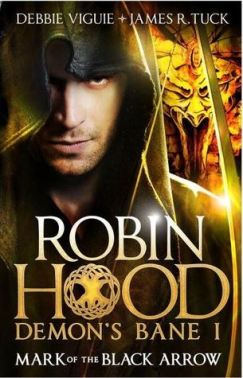 When Titan Books asked whether I wanted to read the first two books in the series I accepted straight away because they sounded like something I would really enjoy. However after reading the first one I’m left a little disappointed. The first half of the book started off with such promise but then it fell a little flat before picking up a little at the end.
A vast darkness is spreading. If left unchecked, it will engulf the world, and so Richard the Lionheart must depart England on a holy mission. In his absence, the safety of the realm is entrusted to his brother, Prince John. When the king departs, black sorcery begins to grip the land, threatening noble and peasant alike. Horrific creatures stalk the forests, yet the violence they commit pales when compared to the atrocities of men. A handful of rebels fight back, but are doomed to fail unless they can find a hero to lead them. Sherwood Forest is a place of magic, and Prince John and his allies are demons bent upon ruling Britain. The solstice draws close, and Prince John and the Sheriff hold Maid Marian, whose blood sacrifice will lock the prince’s hold on the kingdom and the crown. Unless Marian can reach Robin with a magic artefact coveted by the enemy and entrusted to her by the Cardinal, the ritual will occur.
The first half of the book started off with such promise but then it fell a little flat before picking up a little at the end. I think the main problem I have with this book is that there is not enough Robin Hood. The title of the book has his name in it, so you would think that he is the main character, but he is not in the book as much as I hoped. Robin Hood is mentioned and you do get chapters with his POV but because the chapters are split between other characters you don’t get much of Robin, and what you do get isn’t very exciting apart from the end.
Apart from the lack of Robin Hood as a character and the slow middle section of the book, I did enjoy reading it. Both of the writers make you hate Prince John and make you love characters such as Maid Marian and Friar Tuck. This is my first time reading anything written by Debbie Viguié and James R. Tuck and I did enjoy the writing. The way they described some of the scenery and the forest was beautiful to read, and the way the action scenes were written kept me glued to the page.
Even though I didn’t fall in love with this book, I did enjoy it and I would recommend it to anyone who wants to read an enjoyable fantasy book. I have the second book in the series so I will be definitely be checking that out soon. I hope that there is more Robin Hood and a more exciting middle section.

I rate this book 3/5 stars
***I was sent a copy of this book by the Publisher to review. Everything in this review is my own honest opinions.***
My review for the sequel The Two Torcs (Robin Hood: Demon Bane) by Debbie Viguié and James R. Tuck