I’ve decided to write a review on something other than books this week for a little change. This might not be a permeant thing, but I may do some more in the future if you would like me too.

The Marvel Collector Corp box normally has one or two Funko Pop products with a comic, t-shirt/wearable item, badge and other comic related items. They ship every 2 months and each box will have a different theme.

Obviously this review will contain spoilers so if you are yet to receive you box and don’t want to be spoiled then please do not read on!!!!

I love the design of the box this month, the Spider-Man head is great and very eye-catching. Inside the box is also designed brilliantly with different images of him. 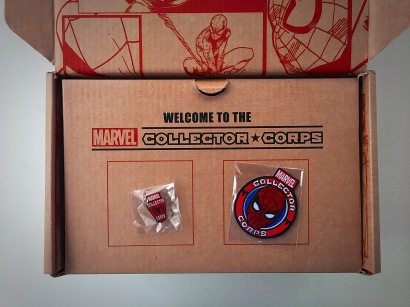 When you open the box you always get a metal badge and a sew on badge. I don’t normally do anything with these because I’m not a badge sort of person. But I will admit that the badges do always look great and they feel like they are made of great quality. 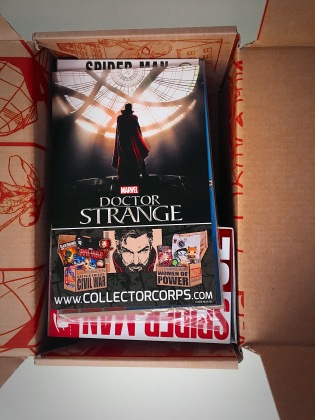 There was a poster announcing the next theme which is Doctor Strange. I don’t know much about Doctor Strange and the film trailers have not really sold me on the film so I am a little unsure whether I will continue with the next box. 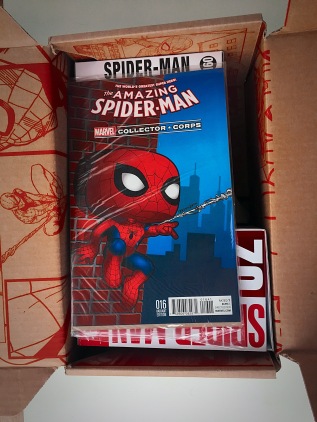 I always love the comic you get in the boxes because the front cover always features a new cover with a Funko Pop in. This Spider-Man one looks great.

When I removed the comic, you are able to see what items we have in the box this month. When I first looked at this I wasn’t too impressed because it looked a little low on items.

Now to look at the items individually.

The comic is a great item, I always flick through and give it a read. This one was a fun and enjoyable read to add to my collection of comics.

I was very disappointed with this item. Normally you get a t-shirt with the box and I was really hoping to have some sort of Spider-Man t-shirt, however I got this hat instead. I’m not a hat person and I don’t know many people who are to even give this too. I do have to say that the hat does feel like it made of really good and lasting material and it doesn’t feel cheap. However the design of the hat isn’t great and for a non-hat person, this was a very disappointing item.

This is my very first Fabrikations, and I do like it. I have seen these around in shops for a while but normally they cost the same or more than a Funko Pop, and I would rather have the Pop. These are considerably bigger than a Pop and they are really a cuddly toy, but I can ever see me taking it out the box to cuddle. Its a good design of Spider-Man, I think it would of been better if he was in a different pose or something. I cant see myself buying more of these to add to the collection though. 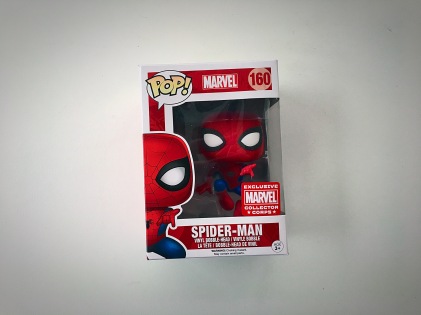 The Funko Pop is the item I always look forward to because its something new and exclusive just for this box. I am happy with this but it is a little boring and samey. I had the Deadpool box a couple of months ago and putting both these Pops side by side they do look very similar. I only have one other Spider-Man Pop and this one is different and the outfit has changed, but I was kind of hoping for something more.

I liked a couple of the items in the box, but I wasn’t blow away buy any of it. I know the theme was Spider-Man but I wanted something  of his villains in the box just to make it different. I don’t think I would of bought this box if I saw the contents before I subscribed because there is nothing in it that I loved. Yes I will display the Pop and maybe the Fabrikation, but the other things will just get stored away.

I think Marvel Collector Corps is very hit and miss at times, it goes from having a great box to having a not so great box, that’s why I am a little apprehensive in subscribing to the Docotor Strange box.

Overall I would rate this box 3/5 stars

Do you subscribe to any subscription boxes? If so which one of them is your favourite?